Large deposits of crude oil called tar sands are located in Alberta, Canada. Exxon Mobil and other oil companies have destroyed boreal forests, water quality, and public health in order to mine and process this dirty fuel. Developing and burning oil from the tar sands produces up to ten times as many greenhouse gases as conventional oil. Big Oil has made tar sands development a global enterprise and will do whatever it takes to get mining equipment in, and the oil out, to foreign markets. Exxon’s Kearl Module Transportation Project (KMTP) and TransCanada’s Keystone XL Pipeline will have direct impacts on Montana and drastic impacts on global warming and the environment. 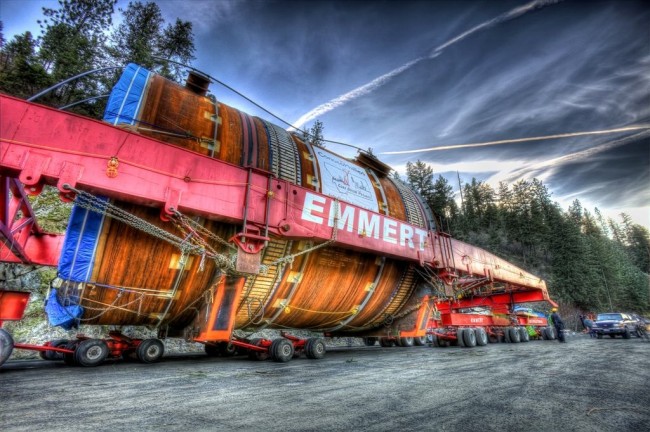 Imperial Oil, a wholly owned subsidiary of Exxon Mobil hopes to use Montana as a conveyer belt for massive tar sands mining equipment manufactured in South Korea and headed to Alberta, Canada. In 2010 Imperial applied for permits with the Montana Department of Transportation (MDT) so they could move these “megaloads” weighing over 500,000 pounds, over three quarters of a football field long, and over two stories high along two-lane highways in western Montana. The project is called the Kearl Module Transportation Project (KMTP) because the equipment will end up at the Kearl tarsands project in Northern Alberta, Canada.

Imperial’s preferred route for the KMTP through Montana (see map below) uses rural highways from the Idaho/Montana border to the Montana/Canadian border. These narrow highways skirt the pristine Blackfoot River and iconic Rocky Mountain Front corridors. Imperial would need to make hundreds of permanent changes to these highways to accommodate these industrial-sized loads. Former MDT director, Jim Lynch, appropriately described the future impact of this project when he said it would create a permanent “high and wide corridor” through western Montana.

After MDT completed an environmental assessment for the project, they determined that it would have “no significant impacts” and issued transportation permits to Imperial Oil. In the Spring of 2011 MEIC, the Montana Chapter of the Sierra Club, Missoula County and National Wildlife Federation filed a lawsuit challenging MDT’s permitting decision because it was based on a flawed environmental assessment and violated the Montana Environmental Policy Act (MEPA).

In February of 2012 a district court judge ruled in favor of MEIC and other plaintiffs and determined that MDT failed to consider impacts of constructing new highway turnouts along the route. For now, we have prevented MDT from rubberstamping this project and allowing Imperial Oil to steamroll Montana.

MEIC board member Zack Winestine was detained with thousands of other citizens during the protests against the Keystone XL project.

Keystone XL is a proposed oil pipeline owned by TransCanada that would carry toxic tar sands crude oil from deposits in Alberta, Canada to refineries along the U.S. Gulf Coast. The U.S. State Department is in charge of approving Keystone because it would cross an international border. The 1,700-mile pipeline would pass through five states including Montana and cross through thousands of rivers that supply drinking water for millions of people. If built, the pipeline would also cut through the heart of the Ogallala Aquifer in Nebraska. Tar sands oil is highly corrosive and a pipeline break could cause an oil spill that would have permanent, disastrous impacts on water quality and farmland. James Hansen, the director of NASA’s Goddard Space Institute said that building Keystone would essentially mean “game over” for any efforts to combat climate change. President Obama decided to put the brakes on Keystone XL until the State Department could fully review its significant environmental and economic risks.