Many of us have worried for years that this day would never come. But here it is. President Obama finally rejected the Keystone XL Pipeline. This is the first time in history that the federal government has rejected a major fossil fuel project due to climate change, and hopefully it won’t be the last.

This is a turning point in our history. Keystone would have facilitated further extraction of the most destructive form of oil development on the planet – the Canadian tar sands. Tar sands extraction destroys Indigenous Lands, wildlife habitat and water quality. It would have crossed the Yellowstone and Missouri Rivers in Montana, threatening them with what have become all too familiar pipeline breaks.  But most importantly, unbridled tar sands development would exacerbate the climate crisis.

Nations around the globe will meet in Paris in three weeks to negotiate a new international climate agreement. Hope for these international talks has never been higher. President Obama just increased the likelihood of success. This is a pivotal moment in time. Please thank President Obama for demonstrating what leadership and courage look like. The only way to solve the climate crisis is through thousands of decisions like this one. It won’t be the silver bullet to success but it most definitely helps pave the way.

Please take a minute and thank our President for his commitment to the future … and take a moment to celebrate!! 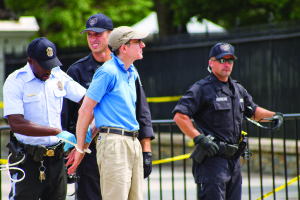 Former MEIC board member Zack Winestine being arrested at the White House in protest of the construction of Keystone XL.