It Turns Out Colstrip Electricity is Expensive – Really, Really Expensive

Raise your hand if you want to pay a lot more for energy that’s dirty.

It’s tiring to hear people repeat the same argument they’ve made since the 1970’s without bothering to update their facts. Namely, “We need coal power because it’s so cheap.” The old argument goes that if we transition off of coal-fired power our bills will skyrocket. Forget the arguments on climate change and the cost that it imposes on society. Let’s just talk about the raw numbers of what we pay for electricity.

Arguments that Colstrip provides cheap power are based on data from way over a decade ago. Times have changed and in order to save money on our already expensive electricity bills, we need to keep up with the times.

The data below says it all, and it was not generated by some wild-eyed liberal nut job. It is data generated annually by NorthWestern Energy itself. The company reports the data every year to the Montana Public Service Commission. That data has been turned into user-friendly graphics by the Montana Consumer Counsel. The graph below is made by government entities using company data. And the conclusions couldn’t be more striking. Coal-fired power is expensive. Most of us don’t earn enough to just burn money, so pay attention to the facts. Just the facts.

All of the Consumer Counsel charts that analyze NorthWestern Energy’s portfolio can be found here, but one chart in particular speaks volumes. Here it is: 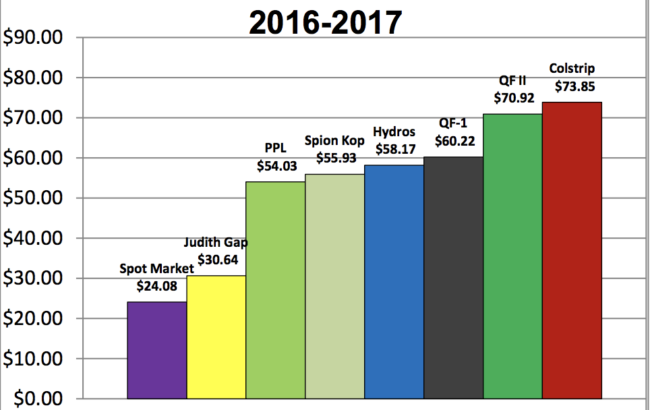 Let’s see what this means:

This chart is based on annual data through June 2017. Since that time renewable energy prices have fallen and the average cost per megawatt for wind and solar under the category of QF 1 will decrease.

In the meantime, whenever you hear someone say that we need Colstrip because it keeps our power bills low, show them the facts. The facts are undisputed. Colstrip is expensive and the cost is rising. Renewables are cheap and getting cheaper. That leaves one question – as a NorthWestern Energy customer, do you want to pay a lot more for your electricity. It’s really that simple.

3 Responses to " It Turns Out Colstrip Electricity is Expensive – Really, Really Expensive "