How Bad Will the 2017 Montana Legislative Session Be? Really Bad.

For months most of us have said: “I’ll be glad when this is over.” Now the old adage rings true – be careful what you wish for.

There’s no getting around it, the elections at the national level were very dismal for the environment (and a lot of other issues). In Montana, Gov. Steve Bullock fought off a challenge from a self-financed billionaire whose primary campaign platform was to save Colstrip from evil environmentalists. Apparently Montanans weren’t buying what Gianforte was selling.

Montana Elections by the Numbers

The top five elected officials in the state, who make up the State Land Board, went from a 4-1 Democratic majority to a 4-1 Republican majority. The Land Board approves the “big ticket” management decisions for the 5.2 million acres of State school trust land scattered across the state. Day-to-day management of these lands remains with the Department of Natural Resources and Conservation. DNRC already favors natural resource extraction and development. It’s hard to see how these new Land Board members could change management decisions to be more in favor of extraction, especially when they have an obligation as trustees of the Trust to manage the land for present and future generations. The agency and previous land boards have always favored short-term revenue over long-term benefits. The Land Board must also approve purchases of land by the Montana Department of Fish, Wildlife, and Parks “involving more than 100 acres or $100,000 in value.” Generally, Republicans don’t favor the government purchasing or managing more land, so these decisions could be jeopardized. 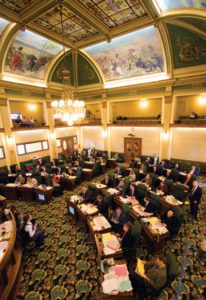 In the Montana Legislature, very little changed. The Senate’s Republican to Democratic split went from 29-21 in 2015 to 32-18 now. Last session the Senate had enough “pro-resource-extraction-at-any-cost” senators on both sides of the political aisle that it was nearly impossible to defend existing environmental laws, let alone improve them. Fortunately, while the numbers have changed slightly, some of the environment’s worst enemies have been either term-limited or moved to the Montana House of Representatives, or both. (Term limits don’t mean much when an anti-environment legislator like Jim Keane (D-Butte) can continually move from one house to the other for as long as he wishes.) While we expect little change in the attitudes toward the environment of the Senate Republicans, the Senate Democrats are likely to be stronger on environmental issues, particularly with the addition of pro-environment former House member, now Sen. Margie MacDonald (D-Billings).

The House of Representatives is a different story. Some of the worst anti-environment, pro-extraction senators moved to the House, so even though the House remains 59 Republicans and 41 Democrats, it is likely to be more of a challenge to defend existing environmental protections in that body.

The biggest saving grace for environmental and public health protections this session will probably be Gov. Bullock’s veto pen. Both the House and Senate have a sufficient number of pro-environment legislators that gubernatorial vetoes are likely to be upheld. That will put incredible pressure on Gov. Bullock. With the newly emboldened anti-environment rhetoric this election season, it is possible that Bullock might just need to borrow the veto branding iron of former Gov. Brian Schweitzer. Energy and mining issues are likely to be the top environmental issues at this legislative session. The messages during this election season were almost exclusively about the closure of the Colstrip plant and the war on coal. More of the same is likely during the session. Gianforte’s nearly single-issue campaign focused on saving the Colstrip plant. The fact that Colstrip was the third highest greenhouse gas polluter in the nation in 2015 was completely ignored. The legislature is likely to do the same, ignore – and even vociferously deny – climate change. And similar to last session, legislators will probably try to punish those involved in setting a timeline for closure of Colstrip Units 1 & 2. Such an effort will only harm Montana and create a hostile business environment for clean energy companies that want to replace the electricity from Colstrip.

The Interim Energy and Telecommunications Committee has already drafted seven bills to address the “problem” of Colstrip’s closure. One of those bills is a good idea and long overdue, analyzing how to protect employee pensions in the wake of shifting natural resource economies. The other bills badly miss the mark. They are an attempt to punish the owners of Colstrip for agreeing to close the smaller two units at the plant. This punitive approach will harm Montana. Colstrip’s owners are largely West Coast utilities that will have to replace the plant’s electricity from some other sources. The customers of those utilities want electricity from lower carbon, or carbon free, sources. This election didn’t change that demand. Montana is rich in low-cost, renewable resources such as wind. Montana’s wind blows when West Coast utilities face their highest demands for power. Montana should encourage those utilities to invest in Montana wind. Punishing these companies for deciding to close an old, inefficient, highly polluting, coal plant will not encourage such investment. It will do the opposite and scare the companies away. Montana workers and taxpayers would be the losers. 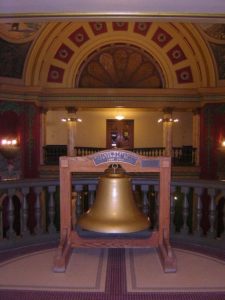 Clean energy development will also be an important topic this session. Public opinion polls show that Montanans love energy efficiency. They love wind and solar. Legislators on the interim committee recommended several bills to allow governments and schools to install bigger renewable energy systems on public buildings to reduce their electricity bills. The committee also supported a bill to “grandfather” in the rate that existing customers receive for the electricity generated by their rooftop solar systems. Unfortunately, there is likely to be an even greater number of bills intended to limit net-metering, weaken the State’s Renewable Energy Standard, eliminate the requirement that utilities obtain some of their electricity from smaller-scale renewable energy projects, make building gas plants easier, and more. This legislature is more likely than not to move the state backwards, not forwards.

Mining is also likely to be a hot topic. There are two principal types of mines in Montana, hardrock mines, such as the one proposed at the headwaters of the Smith River, and coal mines. Montana’s 2017 Legislature will undoubtedly attempt to weaken water and air quality protections, and other regulatory laws, to make it easier to permit both types of mines. The specifics of those proposals are still unclear, but pro-mining forces have always shown a desire to weaken Montana’s environmental safeguards so the industries can maximize their short-term profits. Even Gov. Bullock signed two bills last session to weaken water quality protections for coal mines, particularly for the now abandoned Otter Creek mine proposal. He will be under even more pressure to sign other anti-clean air and water bills this time around. While the crystal ball may be a bit cloudy, there is no doubt that President-elect Donald Trump’s victory will embolden those in Montana who want to undermine basic environmental and public health protections. But polling data confirm that Montanans want clean energy and action on climate change. The polling numbers are overwhelming, regardless of political affiliation. Legislators must hear, in no uncertain terms, that there is strong support for action on climate change.

There is a lot you can do to help. Please sign up to receive alerts from MEIC, and visit our website often so that you can be up-to-date on how to help. Plan on attending at least one hearing this session and insist that legislators protect our life-support systems. Call or meet with your legislators. Take a friend with you, and ask the legislators to move Montana forward. Attend one of three planned Lobby Days and learn how to most effectively have your voice heard during the session. We need you now, more than ever. It’s time for all of us to stand up and be counted.

Next Story:
Trump’s choice for interior gets mixed reviews

One Response to " How Bad Will the 2017 Montana Legislative Session Be? Really Bad. "