Every two years NorthWestern Energy is required to submit a long-term plan to the Montana Public Service Commission (PSC) outlining the utility’s 20-year vision for the energy sources it will acquire to meet the needs of its customers’ homes and businesses. The plan is called the “Electricity Supply Resource Procurement Plan” (RPP) and the latest version was released earlier this year.

The upshot of the plan is that NorthWestern’s vision for the future involves acquiring almost no new wind or solar electricity, assigning no priority to energy efficiency, and placing a risky all-in bet on natural gas. The utility says it has already met the minimum requirements of Montana’s Renewable Energy Standard and sees no reason to do more, even though renewable energy is currently one of the cheapest and least risky sources of electricity. Similarly, energy efficiency is the cheapest source of energy, but NorthWestern has yet to make any serious investments to unlock its potential. In terms of significant new generation, the utility sees only new natural gas plants over the next 20 years.

MEIC submitted comments to the PSC responding to the plan, but we also asked Montana ratepayers to send in comments as well by using the PicMyEnergyMix Montana tool. Over 300 people responded, using the tool to create and send a picture to the PSC of what they would like to see for Montana’s energy future.

What were the results?

71% of respondents also said they wanted to see an increase in energy efficiency.

Or to put it in a visual format (click to make image bigger): 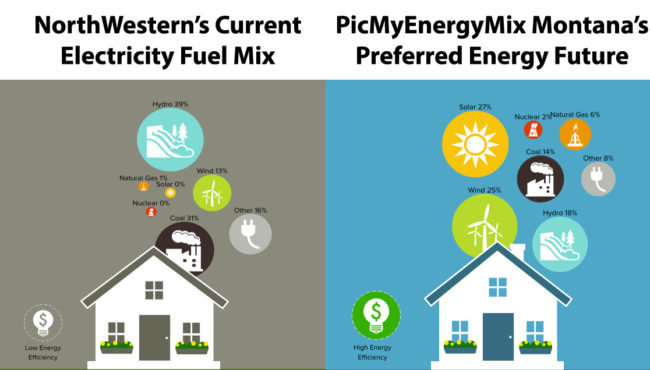 Clearly there’s a disconnect between what NorthWestern is proposing and what their customers want. These numbers also reinforce what public poll after public poll has shown: Montanan’s are ready to clean up our electric grid and start generating home grown wind and solar.

It’s about time NorthWestern got to work listening to their customers.

Previous Story:
Speak Up for a Clean Energy Economy for Montana