Oil and Gas: Don’t Use Our Air as a Dumpster

Methane releases from oil and gas development are a significant source of air pollution and climate change emissions. In fact, in 2013 methane accounted for about 10% of all greenhouse gas emissions in the United States. What’s more, pound for pound, the impact of methane releases on climate change is 25 times greater than C02 over a 100-year period. Fortunately, the U.S. Bureau of Land Management (BLM) has just released a draft rule that is the first-ever aimed at reducing methane emissions from oil and gas operations. We need you to take 1 minute, and tell the BLM that not only do you support the rule, but that you would like to see it improved!

The new rule proposed by the BLM is predicted to reduce methane pollution by 340,000 to 400,000 short tons in 2025, or the equivalent of 7.7-9.0 million metric tons of carbon dioxide. More importantly, a strong rule will ensure that the methane will no longer be wasted, but rather will be captured and utilized as natural gas in homes and businesses. This means that we will stop wasting this valuable resource, and will increase the royalty payments to the U.S. Treasury from public resources.

According to the BLM, between 2009 and 2014, enough natural gas (including methane) was lost through venting, flaring, and leaks to heat more than five million homes for a year. Instead of heating homes and increasing our royalty revenues, it went into the atmosphere and warmed the global climate.

Please take 1 minute, and tell the BLM that you support its efforts to combat climate change and a waste of a public resource. 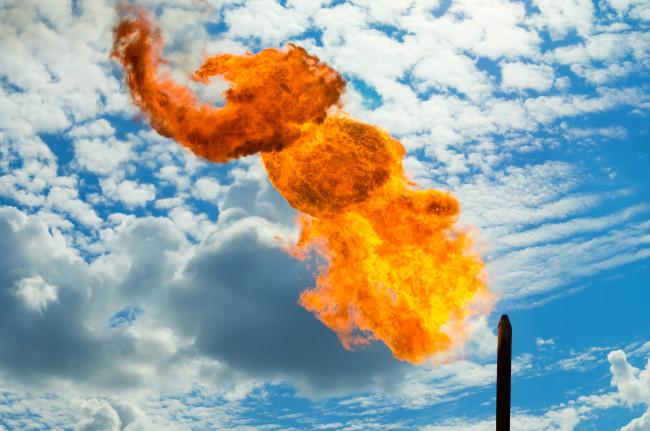 Gas flaring. Torch against the sky.

Previous Story:
Say NO to Electronic Billboards on Montana Highways!

Next Story:
What is the true impact of Washington law affecting Colstrip power plants?

One Response to " Oil and Gas: Don’t Use Our Air as a Dumpster "