TransCanada, the backers of Keystone XL are making similar promises that they are unlikely to honor.

Most Montanans woke up to the terrible news on Monday that, yet again, an oil pipeline ruptured toxic crude into the Yellowstone River. Initial reports estimated that up to 50,000 gallons of crude oil had been released into the Yellowstone from a pipeline that was last inspected 3 years ago, is allegedly buried 8 feet below the surface, is owned by Bridger Pipeline, and is directly upstream from the City of Glendive.

Almost immediately, officials went on record proclaiming that they were “unaware of any threats to public safety or health.” How they were unaware that there were any threats to public health while at least 50,000 gallons of toxic crude began to float down the Yellowstone, contaminate a major river and a source of drinking water for millions of Americans, and poison aquatic species and wildlife, is beyond me.

Of course, less than 24-hours later the cancer-causing agent benzene was found in the water supply of the city of Glendive, after residents “reported an odor in their water,” prompting the public officials to urge residents not to “drink or cook with water from their taps.”  As you can imagine, cleanup is now being hampered by the large amount of ice that characteristically covers the river this time of year. While initial reports also suggested that the rupture was largely contained on the surface of the ice and that Glendive’s water supply would not be compromised because the city draws its water supply from the bottom of the river (and that the oil that breached the pipeline would float), it’s now clear that “Oil has made it into the river,” that the company doesn’t know “how much,” and that “An oil sheen has been seen near Sidney,” a town over sixty miles downstream from where the pipeline ruptured. What’s next in this parade of horribles? A worker attempting to clean up oil from the 2011 rupture of the ExxonMobil pipeline into the Yellowstone. Photo courtesy of Casey Page, Billings Gazette Staff.

This most recent oil pipeline rupture is preceded by a July 2011 rupture by a pipeline owned by ExxonMobil that released 63,000 gallons of toxic crude oil and contaminated close to 100 miles of downstream riverbank, impacting agricultural irragators, farmers and ranchers, and communities. Of course, the initial reports by Exxon attempted to downplay the problem and estimated 42,000 gallons of oil ruptured into the river. Day by day, the estimate for how much oil actually ruptured into the river steadily increased as the public slowly realized the extent of the problem.

Almost as tragic as these  very real disasters is the continuing complacency and tacit acceptance by oil companies that our Yellowstone River (and all of our cherished waterbodies, for that matter) are a sacrifice zone for their industry. Spill after spill after spill after spill, and the public is simply supposed to accept that this is business as usual for the oil industry — that we are supposed to look the other way. That we are supposed to accept that business as usual means that immediately after each and every spill, the oil industry unleashes an army of public relations experts and lawyers to downplay the disaster, avoid their very clear liability, and ultimately avoid a comprehensive cleanup.

Now, the oil industry is seeking to bury yet another pipeline under Montana’s rivers (the Keystone XL Pipeline), much larger in diameter (36 inches), and this time carrying incredibly toxic bitumen tar sands. Previous ruptures of Keystone Phase I have proven incredibly difficult to clean up, especially because tar sands sinks in water (again placing the water supplies of Glendive and other Montana cities at risk). The Keystone XL pipeline is a Canadian project that will allow TransCanada to ship tar sands to oil to refineries on the gulf coast and ultimately to Asia. 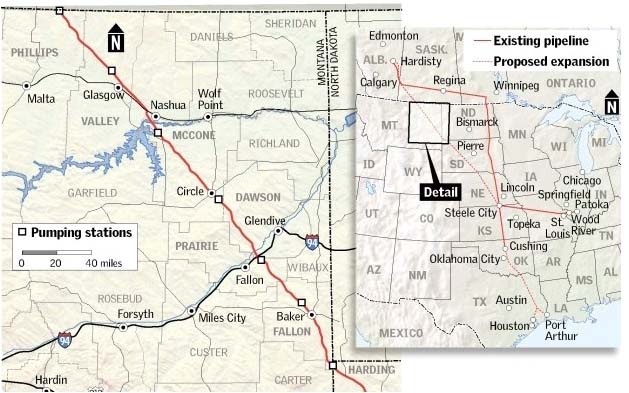 If Keystone XL is constructed, get ready to take it on the chin, Montana, because protecting the integrity of Montana’s rivers is not included in the oil industries bottom line.