What Resources will Meet Montana’s Electricity Needs in the Future? 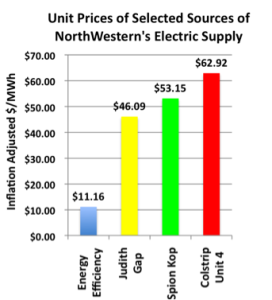 Every two years, NWE files this Resource Procurement Plan (Plan) that identifies the mix of electric resources that they will build or buy to meet the short term and long term electricity needs. If you live within the limits of a city or town in Montana, you are likely a NorthWestern Energy electric customer. This means that this resource plan affects you and your electric bill. Equally as important, NWE’s plan will affect where your electricity comes from.

NorthWestern’s resource plan focuses on the “preferred” resource, or resources that the utility identifies as meeting future electricity needs. In the 2013 Plan, NWE identifies the 11 hydroelectric dams owned by Pennsylvania Power and Light (PPL) as their “preferred” resource. This doesn’t come as a surprise because NorthWestern announced last September that they agreed to purchase the dams from PPL for $900 million.  The total combined capacity of the dams is just over 600 megawatts.

NorthWestern’s decision to purchase the dams and meet their future electricity needs with hydro is significant. Most notably, NorthWestern decided not to purchase the Corette and PPl’s share of Colstrip along with the dams. In fact, NWE determined that PPL’s coal plants have a negative $340 million value.

If the PSC approves NWE’s hydro purchase, the utility will own the majority of its electric supply resources. With the hydro, NorthWestern’s fuel supply mix will be 44% hydro, 30% coal, 20% natural gas, 3% wind, and 3% fuel oil.  Without the hydro, NWE’s fuel supply mix is more than 50% coal.

NorthWestern Energy has described the 234 megawatts they own of Colstrip Unit 4 as “an anchor” resource. The term “anchor” implies that Unit 4 is a reliable and stable resource, but it is anything but reliable. Since 2008, Unit 4 has been shut down for several months at a time. Most recently, Unit 4 was shut down in July of 2013 due to a mechanical failure and was not brought back online until January 2014.

In their 2013 Resource Plan, NWE expects to continue to rely on Colstrip Unit 4. Unfortunately, the plan does not sufficiently analyze the increasing costs and liabilities that Colstrip Unit 4 poses for NorthWestern’s customers. Colstrip Unit 4 is already one of the most costly resources for NWE’s customers (see chart at top right).

Some good news for Montana consumers: NorthWestern Energy does not plan on building or buying any new coal plants in the near future. Based on cost models, NWE determined that new coal poses more financial risk than other alternatives (primarily hydro and natural gas).

NorthWestern currently owns the 40 megawatt Spion Kop wind farm in Cascade County and purchases power from the 135 megawatt Judith Gap wind farm in Meagher County.  These are the primary renewable resources currently supplying customers with clean and affordable power. Despite the benefit that these wind resources already provide customers, NWE does not consider going above and beyond what the law requires. Isn’t more of a good thing a great thing?

Distributed renewable energy is one of the most deficient areas in NorthWestern’s 2013 Plan. The utility does not acknowledge the potential role that smaller scale, onsite renewable energy such as rooftop solar will have in meeting customers’ future electricity needs. NWE’s Plan fails to acknowledge the growth of distributed solar over the last few years as costs have significantly decreased.

Many utilities across the country identify potential future carbon costs and how those carbon costs might impact certain electricity resources in the future. It is encouraging that NorthWestern includes a carbon cost model in their plan. How utilities model carbon costs is just as important when it comes to shielding ratepayers from the future costs of fossil fuel resources.

The carbon costs in NorthWestern’s 2013 Plan should be more robust. For example, NorthWestern chooses a carbon cost of $21 per metric ton starting in 2021 and increasing from there based on an escalation factor. A better approach would be for the utility to model low, medium, and high carbon cost scenarios and determine the lowest cost and least risky resources under each scenario. For comparison, many large companies, including Exxon, are using a $60/ton carbon cost in their calculations.

NorthWestern states that “balancing cost and risk to customers” is one of the primary goals of the Resource Plan. The Plan goes a long way in reducing the inevitable future costs and risks associated with new coal plants. On the other hand, the Plan erroneously relies on Colstrip Unit 4 and does not include sufficient analysis on carbon costs. It also fails to identify new solar, wind, and energy efficiency resources that can effectively meet future electricity needs at a much lower cost and risk than fossil fuels.

The plan is available for public comment. Comments are due March 7th, 2014.