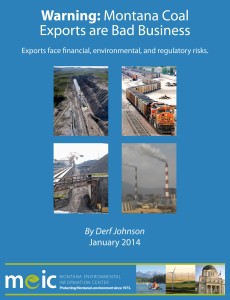 Today the Montana Environmental Information Center released a white paper detailing the major financial, environmental, and regulatory risks facing the export of Montana coal. The report summarizes the major constraints facing the industry’s attempted export of Montana coal, and why the proposal is speculative and fraught with major financial risks.

Beyond considerations of climate change and environmental harm, the proposed increase in exports faces significant financial and regulatory constraints that ultimately cloud their future viability. The coal industry and its supporters are gambling on a market that, more than likely, will no longer exist in the near future.

Montana policy makers and state and local government representatives should view the feasibility of coal exports as an unlikely scenario that is fraught with uncertainty and financial risk. However, significant opportunities currently exist for increased economic growth in the clean energy sector. The transition to clean energy is already well underway, and Montana would be wise to capitalize on this growth sector through policies that encourage a clean energy economy.

“Beyond the sheer audacity of this strategy as an economic development plan and energy production system, this scheme also requires many stars to align. It involves convincing a multiplicity of local, state, national, and international political bodies and legal jurisdictions that exporting coal is a good idea, lining up investors willing to provide the enormous amounts of capital required, and successfully beating the price of competitors (including other coal-exporting countries) to secure long-term contracts.

The problem is that the coal export scheme dreamed up by the industry is becoming riskier, more speculative, and more unlikely by the day. The industry faces a laundry-list of obstacles that stretch from opposition to the proposed mines in Montana and the proposed coal ports on the Pacific Coast, to growing concerns in Asia about coal-caused pollution.”

Next Story:
Thank You for Your Support in 2013!