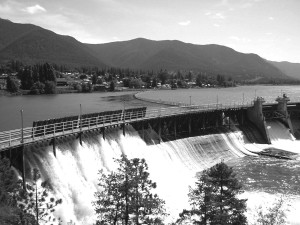 The Thompson Falls Dam, one of the eleven dams that will be purchased by NorthWestern Energy from PPL Corp.

It was good news yesterday when we learned that NorthWestern Energy (NWE) is assisting PPL Corp. in exiting Montana. It was even better news that NWE is buying PPL’s dams, and not purchasing its dirty old coal plants, Colstrip and Corette. It’s hard to imagine that the increasing risk of carbon emissions didn’t play a role in NWE’s decision to steer clear of PPL’s coal plants. Regardless, NorthWestern’s announcement was welcome news, especially in light of the very dire news from today’s release of the Fifth Assessment of the Intergovernmental Panel on Climate Change (IPCC).

The future is in clean energy. It simply has to be. Today’s IPPC report by the world’s top scientists should scare us all into action. Increasing levels of greenhouse gases like carbon dioxide in our atmosphere are having dreadful impacts on the planet and the humans who rely on it. The economy, political stability, and public health are in serious jeopardy. The IPCC is clear. There is a serious problem. Humans are the cause. Only humans can solve the problem. It’s pretty much that simple.

Fortunately, the markets have been moving away from carbon intensive energy sources like coal. A decade ago coal comprised 50% of our nation’s electricity. That number has plummeted in recent years, often to well below 40%. The Wall Street Journal this week reported that more wind generation was installed last year than any other energy source; more than coal and natural gas. While national energy markets are giving observers and analysts whiplash, the international scene is also evolving quickly. CitiBank and Goldman Sachs have dire predictions for coal export markets in the next decade. The time’s they really are a-changing – and not a moment too soon (in fact probably a few decades late).

So what does NWE buying the dams have to do with any of this? PPL’s CEO William Spence’s comment on the sale was indicative of the role carbon is playing in the energy market, in stating “This is an opportunity to secure attractive shareowner value for high-performing, non-carbon assets.” Carbon is now a leading factor influencing energy market decisions. 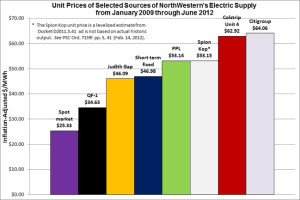 Last fall we learned that PPL wanted to sell its energy generation assets in Montana. We’ve been asking questions and raising the alarm that NWE would be crazy to buy PPL’s coal-fired plants like Corette and Colstrip. Anyone would be crazy to do so. The liabilities at those plants are overwhelming. The energy from those plants is not cheap. It has been one of NorthWestern’s most expensive energy resources (see graph to the left). The air and water contamination from those plants simply cannot be ignored in the risks and costs posed by the plants.

I guess NWE learned a lesson from ARCO’s purchase of the Berkley Pit. The time to buy into a toxic asset is not at the end of its useful life. Instead NWE took a step in the right direction, toward a lower carbon future, the exact future that the IPCC said is necessary to reverse the devastating course we are on.

Next Story:
Say No to Westmoreland Coal Company’s Massive Montana Coal Mine Expansion