Commenting on Ambre’s Decker coal mine expansion is shooting in the dark … and that’s the way Ambre likes it. 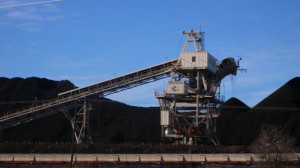 When the U.S. Bureau of Land Management (BLM) asked for “feedback” on a proposal to lease 500 acres of coal-bearing land to the Decker West mine, the first question that came to mind was –what is the proposal exactly? The Decker Coal Company is owned by Australian coal giant Ambre Energy, a company leading the industry blitz to build West Coast coal export terminals so coal companies can make a killing selling undervalued U.S. coal to Asian markets. But if you want to find out more about Ambre’s proposal…fat chance!

BLM sent out a notice requesting public “feedback relevant to the issues that may influence the scope of the environmental analysis, including alternatives.” I also got a letter from BLM saying the most useful public comments are those that are “specific.”

Why is Ambre Energy’s Coal Mine Expansion Confidential?

A very pleasant BLM staffer told me the site contains a total of 40 million tons, but I had to call a different office for a copy of the application. So I did. Another very pleasant person told me I can’t have the application. Why is Ambre Energy’s Coal Mine Expansion Confidential? Because Ambre said so. Ambre simply marked pages of their application confidential. Ambre didn’t say why the information was confidential and apparently BLM didn’t ask.

In order to read the application that BLM wants you to comment on, you need to file a Freedom of Information Act (FOIA) request. BLM will then ask Ambre to justify its confidentiality claims. When Ambre responds, BLM will determine if it meets the legal standard for confidentiality. If it doesn’t, BLM will release the application to me. If BLM says it is confidential, then who knows if I’ll get anything at all or just those sections that are not claimed as confidential. Either way, it will take a while.

Yesterday I filed a FOIA request for the application. Even if BLM decides I am entitled to the application, which I need to make “specific” comments on regarding “relevant issues … including alternatives,” I won’t get that information until long after the comment period closes.

How can anyone be expected to meaningfully comment on alternatives to the proposal when they can’t even see what is being proposed? Shooting in the dark indeed!

The Decker coal strip mine is located adjacent to the Tongue River Reservoir in Southeastern Montana. Last year a local agricultural water users group charged that the Montana Department of Environmental Quality issued a water discharge permit to the mine that continues to allow direct discharges from the mine into the Tongue River Reservoir that exceed the state’s long established water quality standards.